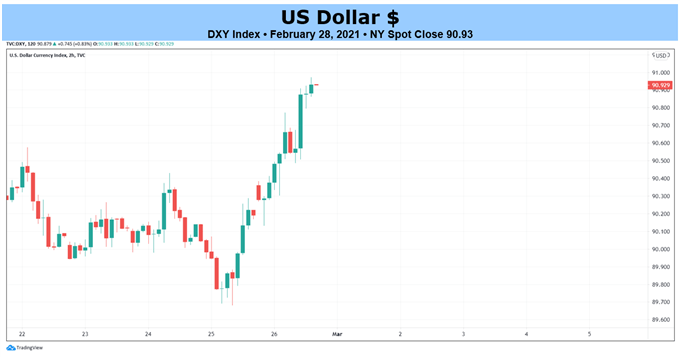 Technical Forecast for the US Dollar: Neutral

US Dollar Rates Week in Review

The US Dollar (via the DXY Index) was having lackluster week until Thursday (even as Fed Chair Jerome Powell testified on Capitol Hill), when it seems the uptick in US Treasury yields finally spilled over to FX markets, lifting the greenback through Friday into the weekly close. The DXY Index rallied by +0.57%, its second best weekly performance year-to-date, just behind the second week of January (+0.70%).

The US Dollar gauge warded off a significant technical breakdown, and now it appears that major technical damage is ‘undone,’ to an extent. The arrival of the first week of a new month should bring about the usual uptick in volatility in USD-pairs, thanks in part to elevated event risk.

Get Your Free USD Forecast

US Economic Calendar Week Ahead

The first week of March offers a robust economic calendar, with a global focus during the early part of the week and a US-centric focus to cap things off. There are several items on the calendar that are worth paying attention to from the US Dollar’s perspective, culminating in the March US labor market report on Friday.

– Fed Governor Lael Brainard will be giving speeches on Monday and Tuesday.

– On Thursday, focus swings to US labor markets, with the weekly US jobless claims figures out, as well as the January US factory orders report. Fed Chair Powell will give a speech on Thursday, which will likely focus on recent action in US Treasury yields.

– On Friday, the February US non-farm payrolls report as well as the February US unemployment rate will be released. Later in the day, the US budget plan for fiscal year 2022 will be made public.

The DXY Index had been clinging onto the downtrend from the March and November 2020 highs, but was finally able to turn higher on Thursday and Friday, breaking the intramonth downtrend in the process. Early-March will prove to be a significant psychological test for the US Dollar, the series of lower highs and lower lows was never broken throughout February. Now, a move over the mid-February swing high of 91.06 would suggest that the turn higher is gaining legitimacy.

Momentum is turning after the abrupt rally in prices. The DXY Index is above its daily 5-, 8-, 13-, and 21-EMA envelope, which is in neither bearish nor bullish sequential order. Daily Slow Stochastics are driving higher from oversold territory, while daily MACD is starting to turn higher albeit below its signal line. More choppiness could be ahead, which was more or less the state of affairs throughout February. 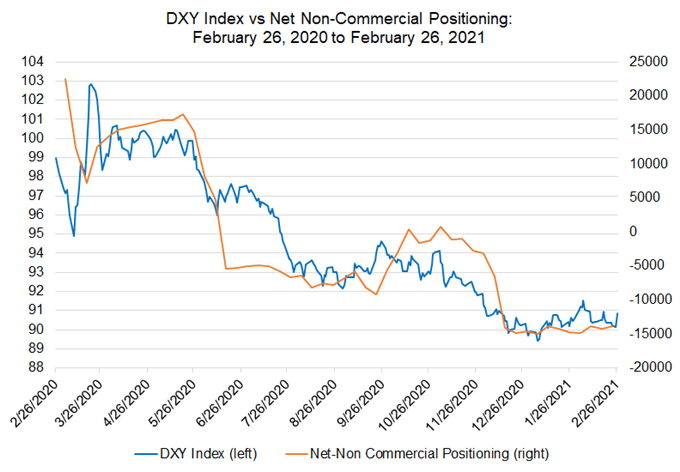 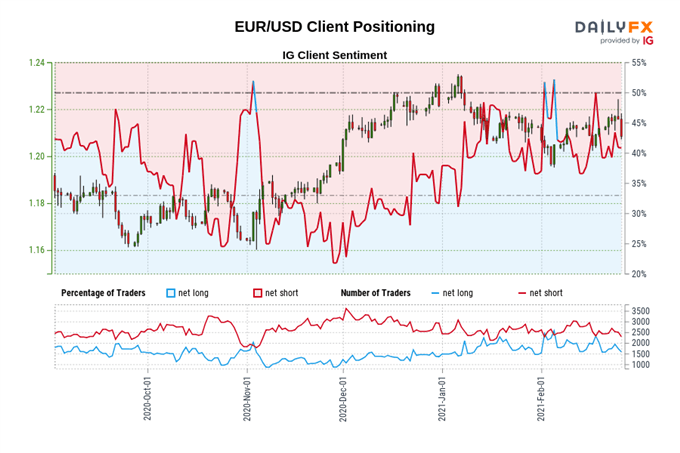 We typically take a contrarian view to crowd sentiment, and the fact traders are net-short suggests EUR/USD prices may continue to rise.

Yet traders are less net-short than yesterday and compared with last week. Recent changes in sentiment warn that the current EUR/USD price trend may soon reverse lower despite the fact traders remain net-short.